Dawn of the Planet of the Apes has proved the summer box office success story and deservedly so. While not without flaws, the story continues in the same vein of 2011's Rise of the Planet of the Apes, charting new territory in the process. Rise... proved that it is possible to successfully re-invent a classic, doing so by staying true to the original intent, without necessarily being in thrall to it. This contrasts with 2001 're-imagining', which seemed to be too obsessed with the fantasy elements, ignoring the allegorical basis of the saga that is, Planet of the Apes.

A valid criticism of Dawn... might be that it is unevenly paced. It starts with quite a bang, sags somewhere in the middle before picking up steam again as the viewer becomes aware that this is merely a middle act in a drama that promises much more to come. 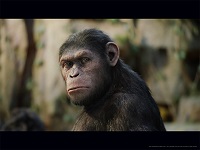 Dawn... is set in and around San Francisco, ten years into a future, post-apocalyptic world where a deadly virus has devastated the human population of the planet. Only those who are genetically immune have survived. An ape and a human colony face each other down in a tense stand-off. Human civilisation has all but collapsed; ape civilisation is struggling to emerge. It seems that the human colony have come close to the brink; only a small nucleus of leaders are keeping the camp together. There are hints that a partial reversion to primitive savagery has taken place, as per the human population that Taylor et al encounter in the original series. 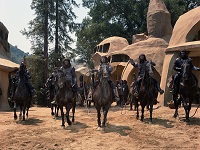 The humans pin their hopes on a disused hydro-electric dam that, unfortunately lies in Ape territory, where they have been warned not to set foot. The dilemma, therefore, is whether to attempt to negotiate with the apes or seek to force the issue by other means. The apes, for their part, know next to nothing about human technology but are deeply suspicious of human motive.

Caesar, whom we last saw in Rise..., has emerged as the leader of the ape community but faces increasing discord within his own ranks. When approached by the humans for help in rejuvenating the hydro-electric dam, he is initially reluctant but gradually accedes. When questioned why, he responds only that, "They seem so desperate." This leads to accusations, in the ape camp, that Caesar is soft on humans. What will happen when the humans are not so desperate, once they have regained their strength?

Caesar comes under increasing strain from his ape cohorts and later, comes to rue that he may have been naive in his belief about the innate 'goodness' of apes. He has, after all, spent most of his life among humans, to whom he was something of a 'pet'.

Similar to the way that Rise... carried tongue-in-cheek tributes to the original series, recycling some of the classic quotes from the original ("Get your damn dirty ape paws off of me" or "It's a madhouse, a madhouse, I tell ya") Dawn... continues to make allusions to the original series. For example, towards the end of Dawn..., we see the surviving humans fleeing the city. A few however, among those who form the leadership, appear resolved to fight on and take refuge in an underground subway. Sound familiar? 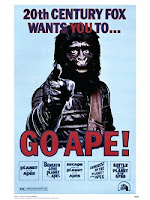 At the same time, the new franchise has, to date at any rate, stuck to a strictly linear narrative. No mention of space travel or time warps yet. Indeed, one feature of the latest franchise would appear to be a determination to 'keep it real', relying more on science fact than science fiction. Even the special effects, particularly in Dawn..., convey a gritty and grim reality. This is one essential difference between the current rendering of the Planet of the Apes saga and Tim Burton's 2001 effort. The all-important air of 'plausbility' is maintained. Planet of the Apes, after all, is about 'holding up a mirror' for all humankind to see itself, asking the probing questions of where are we going? Is this what we are becoming? Is this what how we want to be seen?

The key pre-occupation of Dawn... seems to be that it is easier to start a war than to prevent one. It is hinted that the next instalment will probe the question further: whether it is possible to end a war once it has started. We can only wait and see. 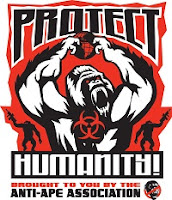 While waiting to find out, we also have a very important question to put to fans of Planet of the Apes – the books, the films, the TV series, the entire franchise it has spawned. We want to know What is Your Favourite Planet of the Apes and to determine this question, we invite you to take part in our specially constructed Online Poll (see below). Simple as that.

As a special offer, we have free copies of Planet of the Apes Saga Poster Collection to give away, courtesy of Insight Editions. It features 40 stunning removable posters, capturing all the drama and action of the beloved movie saga, from the original classics to the latest re-invention in Rise... and Dawn of the Planet of the Apes.

Planet of the Apes Saga: The Poster Collection is the ultimate book for fans of the beloved science fiction saga. To be in with a chance to win one, all you have to do is to take part in our free Online Poll.

Unfortunately, due to shipping costs, prizes will only be dispatched to addresses within USA and Canada. Planet of the Apes fans living elsewhere are still welcome to take part in our Online Poll. In order to be in with a chance to win a copy of the Poster Collection, you will have to provide a valid address, which means finding someone in the USA or Canada who is kind enough to take delivery and kinder still to forward it to you - be warned, some people will be inclined to keep it for themselves once they see what an attractive publication it is!

So get voting now. The poll will remain open indefinitely but the closing date for entries for the Planet of the Apes Saga Poster Collection competition is Friday, 31 October, 2014. Three valid entries will be drawn at random. The judges decision is final and no correspondence will be entered into. Winners will be notified and results of the poll will be announced shortly thereafter. Best of luck!

Online Poll - Vote for Your Favourite Planet of the Apes

Web Design by:
Documents and Manuscripts